Crazy day today!
Drove up here (Bear Lake, UT) yesterday with my friend Sue Frehse and my father-in-law Jed.  A family member has a real nice cabin in close proximity to the lake so we stayed there Friday night.  Saturday we all got up early and were out the door by 0610.  Of the 100 things I remembered to do and pack, I forgot grease!  I figured I could just run by the gas station there and get some.  What I did not account for was that a 1/2 Ironman was in town so the entire stock, including the back, was gone.  I now was on a Vaseline hunt!  I drove all around Bear Lake looking for another gas station or ANY store that sold petroleum jelly.  99% of everything is closed until around 0800 or even later.  I finally found a small store open after 0700 and he had some.
Now I can drive to the start.  I was talking and laughing with Sue and Jed when I saw a police officer behind me with his lights on.  Great, this has to be for me!  I pulled over and he said I was doing 61 in a 40 MPH zone...OOPS!  Well this is going to be expensive.  I had my license, registration, but no proof of insurance.  Come on, it's all electronic now.  I just didn't hit "print".  He did ask where I was going and I told him I was driving to the other side of the lake so I can swim back.  His face changed as I could tell he was thinking, "You are doing WHAT"?  He came back and sure enough, he had a ticket for me.  The surprise was that the ticket was for not having insurance info on me.  He only gave me a warning for speeding.  He said he's cutting me a huge break by letting the speeding thing go... yeah, no s**t!  I thanked him but couldn't resist asking him if one of the reasons I got off was because I was going to swim so far.  He said it was in the back of his mind that it was nuts what I was doing.  I KNEW IT!!  The insurance charges will be dropped once I email them proof.  SCORE!!!
I then headed to the start.  I saw the 1/2 Ironman rubbers at the very south end of the lake getting ready for their 0800 start.  Sue and I noticed a huge yellow floating "thing" in the middle of the swim route.  It was a "rest area" that some Ironman races are allowing.  If you get tired, or sick, or cramped, or w/e, you can swim to this thing, hold on to it, or get on top to rest.  The only penalty is time added on for however long you rest.  The swim is only 1.2 miles.  Are you freaking kidding me???  This only goes to reinforce my theory that triathletes have NO idea how to swim......must.....resist.....mocking....."triathletes"..............
ANYHOW, we got to the start and I wasted no time getting ready to get in.  I hid it but I was getting nervous as it was a realty that this was definitely going to happen.  It has been raining with thunder/lightning the past few days here but it looked good as I got ready.  Lake was calm but you could easily see a strong current heading north.

Took some pics then I was off.  The water was 68 degrees and it only took 2 strokes until I felt adjusted.  Hooray cold showers!!!  I could feel the current immediately.  Sue and I talked and agreed that I should go straight across and let the current carry me north naturally to where the marina is.  It's a bit north of where the starting point is on the western side.
The first few miles went by without incident and some miles were faster than others.  I felt good.  It took about 1.5 miles for my body to relax, bilateral breathe, and start swimming stronger.
My pace was around 52-55 SPM.  I really kept focusing on my pull pattern and my technique.  During a few feeds, I would ask how far I was.  I was disappointed in knowing I was only averaging 1.5 to 1.6 MPH.  I'm normally 2 MPH on average.  I know I wasn't swimming that slow because I was going slow.  I've been swimming much faster lately in the pool.  I held back a bit on my effort so I could make it across without dying but no way I was going this slow.  I asked Sue and she said the current is what is to blame.  We kept getting knocked around.  The current was stronger than I thought and I was swimming while fighting with it some.


When I reached halfway, the currents got really strong.  I could feel myself fighting to stay on course and even distance with Sue.  It started to wear me out a bit.
Once we were about 2/3 of the way, the currents on top shifted immediately.  We were now fighting currents heading south.  When I did a pull, I would relax my fingers and the current at my hands was still heading north...JOY!  We slowly got pushed south of the marina where the finish was.  We had no choice but to swim directly against the current for about 1/2 mile.  This was at the very end of my swim and it really kicked my butt.  I was doing 100 pulls hard then 100 pulls normal but wasn't making any progress.  I pulled up and asked Sue why we weren't going anywhere.  She said we in fact were moving but it was slow and the currents are directly against us so we are kinda screwed.  I put my head down and charged ahead.  I just did strong pulls the entire way hoping my arms would hold out until we got past the marina.  They barely did.  I turned the corner to start the home stretch of 500 yards and my arms were SHOT.
I was out of the current going against me and Sue paddled ahead to shore so she could photo me coming in.  I could barely do a decent stroke without it hurting.  I was completely prepared for the distance but not as ready to fight currents for 95% of the swim.  That is what kicked my butt so bad.
Overall I felt great during the swim.  I was using this swim to see if I should go for another UTC and I felt strong enough that I know I could have done 3 more if I wasn't fighting the currents the whole way.  If I go to Deer Creek and it's even half as calm as it was at Bear Lake, I'll make 10 easy.  It will be slower going but I can definitely make the distance.
I am thankful for Jed for driving our SUV around the lake and picking us up.  You were a great help.
I can't thank Sue enough for her paddling me across.  She was great on her guiding, encouraging during feeds, and took lots of pics.
Last, I appreciate my wife the most for allowing me to take off to do these swims.  She could easily say no and pull 1000 trump cards for why she needs me here to help with chores or our girls but she is Superwoman and allows me to go do these swims and takes care of everything solo.  Thanks Patricia, you are the best.
6.8 miles OW
For all my friends that have been jokingly giving me crap the past 24 hours about my data so I'm not "DN", here you go...GPS proof. 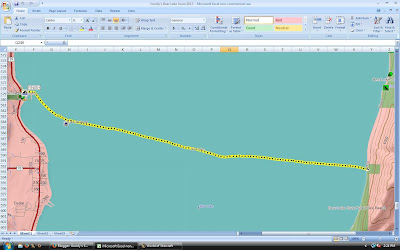 And here is a pic to show how I feel about the "did he legitimately do it" jokes.  (You know I love you all.  Thanks for the hard time!)

Goals for this year

I'm keeping my goal for this year a secret. Need to do a LOT of logistics work to make it happen first.